As part of the transaction, Ottawa-based Origin House also is selling back to AltMed a 3.5 percent royalty on the sale of some of AltMed’s MÜV products.

AltMed will issue 125 units and cash for the royalty interest. When the transaction closes, which is expected to be by Feb. 15, Origin House will own 5.1 percent of AltMed, up from 4.8 percent. The stake will be worth $10.3 million, the company said in a news release.

“The royalty agreement signed back in 2014 would have required some substantial and ongoing re-writes, given AltMed Enterprises’ continuous R&D approach, which has resulted in the development of significant intellectual property and numerous new product introductions over that time,” Mike Smullen, chairman and CEO of AltMed Enterprises, said in a separate email.

“The decision to transition Origin House’s royalty stake to an equity position also suggests a vote of confidence for the perceived value of AME shares now and in the future. This agreement represents a true win-win between AME and Origin House.”

A statement by Marc Lustig, chairman and CEO of Origin House, reflected confidence.

“AltMed has established itself as a successful cannabis business in the key markets of Florida and Arizona,”
Lustig said in the release announcing the transaction. “We are confident in AltMed’s prospects and believe that our increased equity position will continue to lead to significant value creation for Origin House shareholders.”

Origin House operates primarily in California, where it sells more than 130 branded cannabis products to the majority of licensed dispensaries in the world’s largest regulated cannabis market.

AltMed is one of only 14 license holders in Florida, where it has a 150,000-square-foot, state-of-the-art indoor farm and three dispensaries in the Tampa Bay and Sarasota markets. The company said it plans to expand next into Miami, Orlando and Palm Beach, with 25 dispensaries in the state eventually. AltMed also has an established presence in Arizona.

Origin House’s shares, which trade on the Canadian Securities Exchange under the symbol OH, were trading Wednesday afternoon for $7.46, down 10 cents.

Despite The Landscape, AltMed is Growing Like a Weed.

A local company aims to deliver a big dose of top-notch service to the nascent medical marijuana industry. by: Mark Gordon | Contributor How high ... Read More 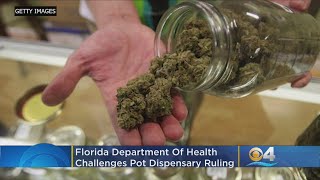 The Department of Health has appealed a circuit judge’s ruling that struck down a limit on the number of dispensaries that cannabis businesses can operate. ... Read More